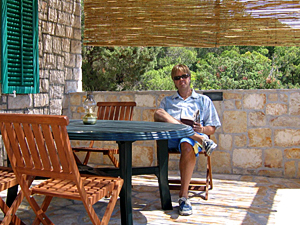 Coming to Bobovisca was like arriving in paradise, beautiful, unspoiled and very quiet, just what we were looking for. 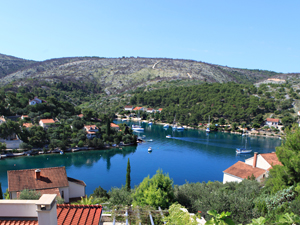 Now it feels just right to share my paradise, and therefore I welcome you to  Villa More, my paradise that might be yours.

The trip to Croatia

In the spring of 2002, we left Gothenburg with the idea that we would sail around the world. The house was rented, the company sold and the holiday could begin…
After sailing through the North Sea and the Channel-Biscay-Atlantic, we eventually rounded the south western tip of Portugal the “Vila do Bispo.” Here we encountered some problems with our communication , so instead of sailing to the Canary Islands the destination became Gibraltar.

The journey to Croatia

Once in the Mediterranean, we met several like minded world sailors who have sailed in the Croatian archipelago and all spoke warmly of this sailing paradise. The choice was not that hard to make, after we spent the winter in Aquadulce (Spain), we headed to CroatiaOur first stop was the Balearic Islands, the islands of Formentera, Ibiza, Majorca and Menorca. Then we steered our floating home to Sardinia, the Lipari Islands, Sicily, the Strait of Messina, Otranto bay and finally into the Adriatic Sea.

We eventually left the Italian village of Vieste and headed north towards the Croatian island of Vis. When we arrived (after 11 hours of sailing in good conditions), we dropped anchor in the evening of July 27th, 2003 in the bay of “Rukavac”..

The silence and peace we experienced when the anchor was dropped and the engine turned off felt absolutely fantastic. We were in the complete darkness of night, relying on radar and GPS. We did not really know what the landscape resembled around us.

We went to sleep satisfied, knowing we would spend a long time discovering the Croatian archipelago.

After trouble-free sailing in 2003 and 2004, we encountered foul weather when we were on the island of Solta in the harbour of Rogac. Although the weather forecast was good a strong wind named Bura surprised us. The wind increased rapidly to 25 meters a second and it hit us hard. It became absolutely necessary to find good shelter when the wind blew straight into the harbour we where in.

After a quick look at the chart, I found a cove on the neighbouring island of Brac that
was one of Croatia’s most sheltered and secure anchoring sites no matter which direction the wind blew.
After 3 hours of struggle with the motor at maximum speed, I managed to enter the bay of Bobovisca. When the anchor was down and the beer bottles were empty, we fell asleep in our wet sailing clothes, curled up on the sofa.

The next morning I woke up to a man standing on the dock and waving, first, I thought I had tied the boat on to a private dock, but after speaking to the man I found out that he had seen my Swedish flag, and he invited us to lunch to discuss Sweden and old memories, in the 60’s he made a lot of business with Sweden and Finland

It turned out that the man did business in the timber industry throughout the years. After a moment of discussion he asked me if I could help him design a sauna. He had once taken a sauna with Finnish President Urho Kekkonen and now he wanted to build his own. Of course I offered my help.

After yet another bottle of wine I finished the sketches of the sauna. There are now five families who have a sauna in Bobovisca so I was actually the co-creator of a trend.

After a five hour lunch in perfect weather with a pleasant new acquaintance, and plenty of wine on hand I asked spontaneously if there were any houses for sale in Bobovisca, the man replied that the neighbouring house had been empty for 18 years and that the owner had moved to the United States during the war, the man who owned the house was Serbian and he no longer felt welcome in Croatia so he chose to abandon it.

After some successful detective work, I tracked down the owner and after long and hard negotiation we managed to buy the house in the autumn of 2004. After the purchase we decided to do a complete renovation.
Coming to Bobovisca was like arriving in paradise, beautiful, unspoiled and very quiet, just what we were looking for.
Now it feels just right to share my paradise, and therefore I welcome you to  Villa More, my paradise that might be yours.